Skip to content
The epic story “kontinues” in part two of our Mortal Kombat history, featuring MK’s final arcade outing all the way up to Armageddon… 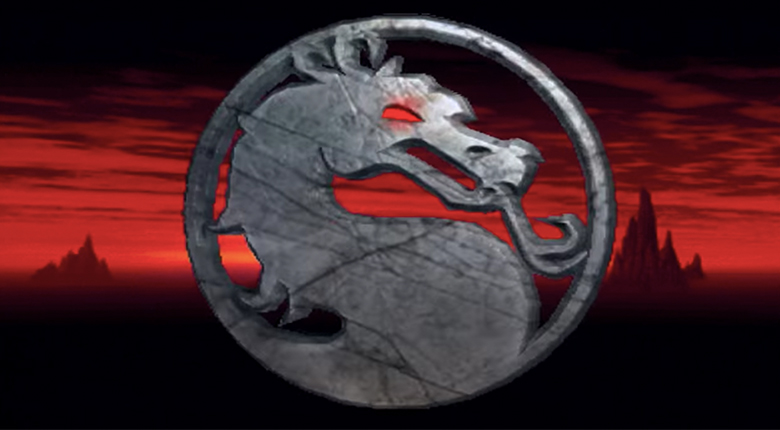 After three defeats at the fists of Liu Kang, Shao Kahn was no longer the biggest threat to the stability of the realms. But things never stay peaceful for long in the Mortal Kombat universe, and an ancient evil was about to rear its ugly head.
For “kontext”; thousands of years ago, there was some dissension among the ranks of the Elder Gods, which may be putting it mildly. Knowing the corrupted god Shinnok was about to embark on a realm-conquering spree, Raiden waged a war against him that would span hundreds of years. After Raiden won, he banished Shinnok to the fiery hellscape of Netherrealm. And that was that… well, sort of. 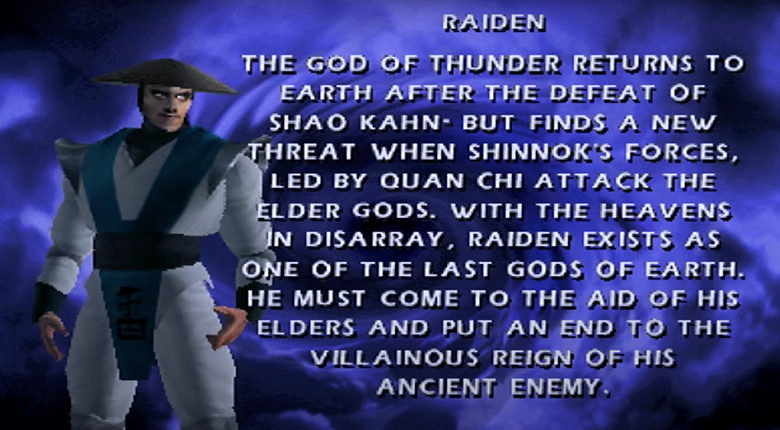 With the assistance of the dark sorcerer Quan Chi, Shinnok managed to break out of Netherrealm and sought vengeance on the Elder Gods. Shinnok’s forces also managed to invade Edenia, having snuck in with the aid of the ambassador’s daughter, Tanya. Edenia just can’t catch a break, can it?
Raiden called upon Earthrealm’s surviving champions once again; this time including a Shaolin warrior named Kai, Fuijin the god of wind, and Johnny Cage, who’d been resurrected after his death in the previous tournament. You’ve got to admit, that’s one hell of a comeback! 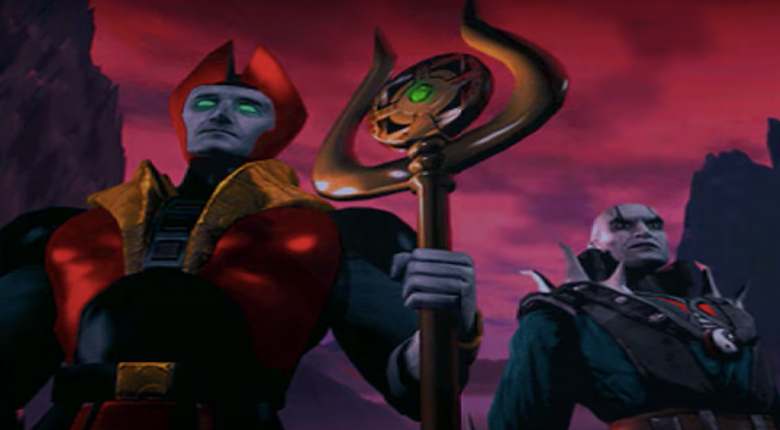 Aside from the hefty task of fighting an actual god, Earthrealm’s forces had a whole host of enemies to “kontend” with. These included the sorcerer Quan Chi, the traitorous Tanya, General Reiko, Jarek (believed to be the last surviving Black Dragon), and “Meat”, a ghastly experiment of Shang Tsung’s with no skin. Surprisingly enough, Goro also made a comeback, as rumours of his death on Shang Tsung’s island were apparently exaggerated.
Liu Kang won for the fourth time, defeated Shinnok and restored peace, but still believed he’d failed to save Edenia. 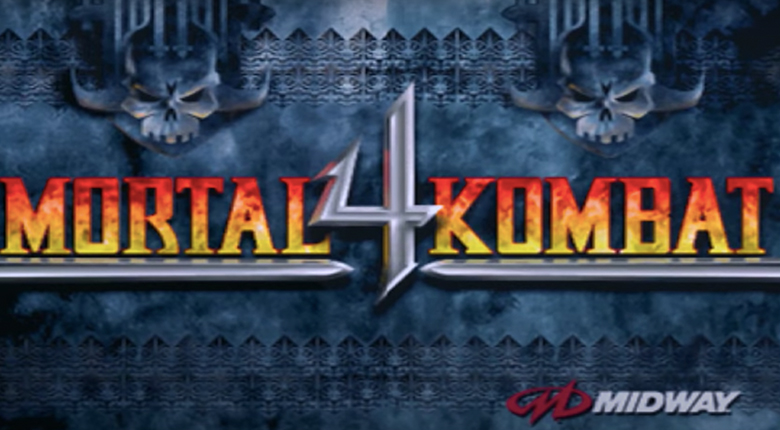 However, Liu Kang’s struggles were put to rest as Kitana appeared before him, telling Kang her world was set free and even offering him the chance to rule the kingdom with her. But power and status could not sway our humble hero, and Kang politely declined, knowing his place was protecting Earthrealm.
It seemed certain by now that Liu Kang would always save the day, which is why the next tournament delivered one of the biggest upsets in Mortal Kombat history.

The “Deadly Alliance” was between Shang Tsung and Quan Chi - two evil sorcerers that became doubly dangerous when their powers combined. They began by eliminating the two biggest threats to their wicked ambitions; Shao Kahn, and Liu Kang.
Quan Chi had found himself in Netherrealm at the end of Shinnok’s tournament, after an enraged Scorpion literally dragged him to hell. Well, telling a revenge-driven spectre that you killed his family was bound to tick him off! Quan Chi escaped, thanks to a little bit of help plus Shinnok’s stolen amulet, and emerged in an Outworld tomb containing the mummified remains of the late Dragon King’s “undefeatable” army. This gave him an idea - team up with Shang Tsung, and restore the army with the souls of dead warriors. 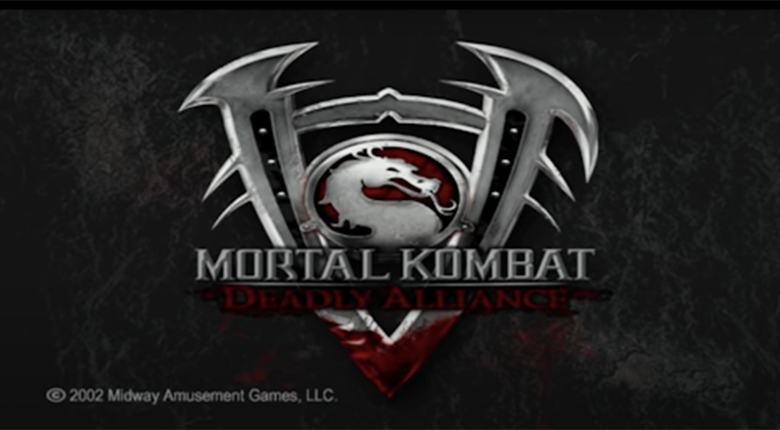 When the Elder Gods refused to intervene, Raiden renounced his position and gathered his allies, joined this time by Liu Kang’s former fighting teacher Bo’ Rai Cho, the blind swordsman Kenshi, a new Lin Kuei recruit named Frost, and Johnny Cage’s motion capture artist “Mokap”. The Deadly Alliance were also opposed by two Netherrealm demons (or “Oni”), Drahmin and Moloch, who were betrayed during Quan Chi’s escape.
Several Outworld natives entered the tournament seeking liberation for their people, including the vampiric Nitara, and Li Mei, whose village was forced into slavery. Also present were the Red Dragon clan members Mavado and Hsu Hao, sworn enemies of both the Special Forces and the Black Dragons. Meanwhile, a fire elemental known as Blaze guarded the egg of the Dragon King. 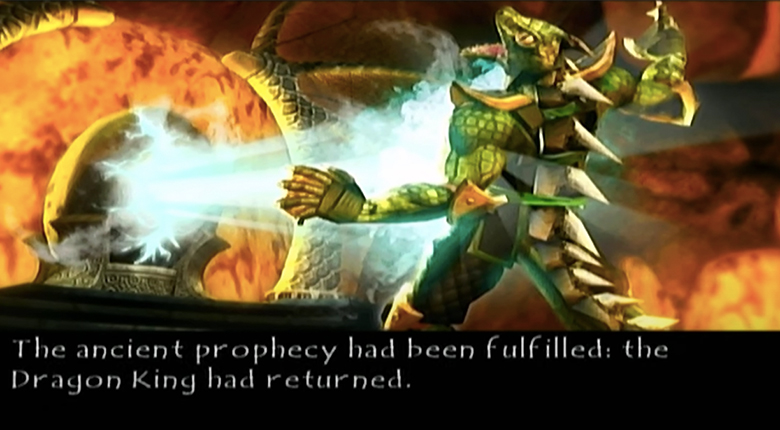 For the first time, Earthrealm’s heroes failed in their mission. Sonya Blade, Johnny Cage, Kung Lao, Jax and Kitana were all slain, and Raiden failed to fight off the two sorcerers. Meanwhile, the Dragon King’s egg hatched, using Reptile as a host body for its ancient soul.

The problem with any alliance between two evildoers is that it inevitably falls apart. And the problem with stealing an army from an Outworld overlord is that he may eventually want it back. 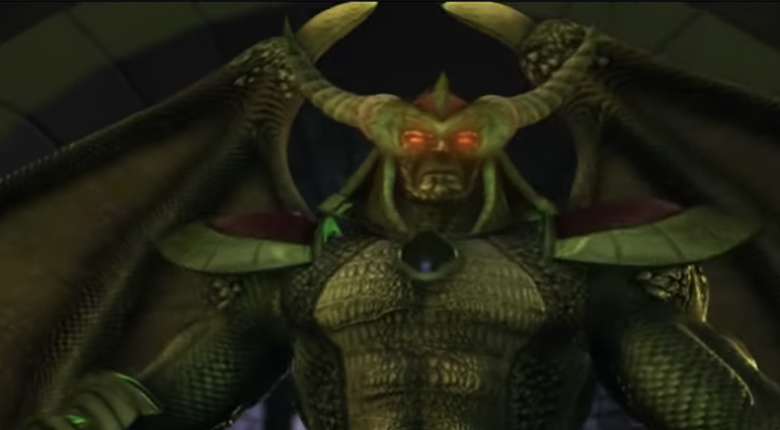 Shang Tsung and Quan Chi turned on each other (because of course they did), with Quan Chi winning Shinnok’s amulet. His victory was short-lived however, as the Dragon King Onaga had just awoken and was ready to regain control. Quan Chi, Shang Tsung and Raiden fought Onaga together, with Raiden’s last resort being a massive explosion that destroyed everything in the vicinity, including himself. Unfortunately, Raiden’s blast failed to stop the Dragon King, who considered it nought but a scratch. 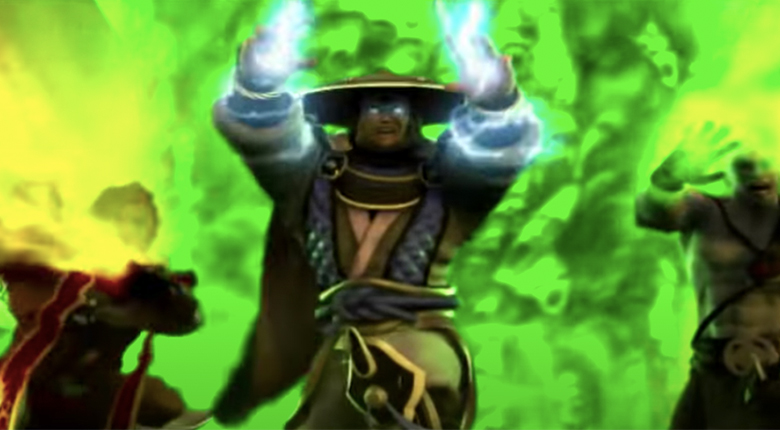 Using his power to bring back the dead (which explained his “immortal” army), Onaga resurrected the Earthrealm warriors killed in the last tournament and used them to do his bidding. Onaga also managed to forge some new alliances in Seido (the “Realm of Order”), where the guard leader Hotaru pledged his services, and also in Edenia, where the devious Mileena had disguised herself as her “sister” Kitana.
While Liu Kang’s body was reanimated as a zombie, his soul joined with Ermac, who then assisted the deceased warrior in freeing his fallen friends. Two other combatants who joined forces were Smoke and Noob Saibot, as the wraith managed to revive and reprogramme the Cyber Lin Kuei, combining with him to form “Noob Smoke”. Also competing in this tournament were a demon-slash-demon-slayer named Ashrah, two new recruits of the Black Dragon called Kira and Kobra, Dairou and Darrius of Seido, and Havik, a cleric of the Chaosrealm who wished to resurrect Shao Kahn. 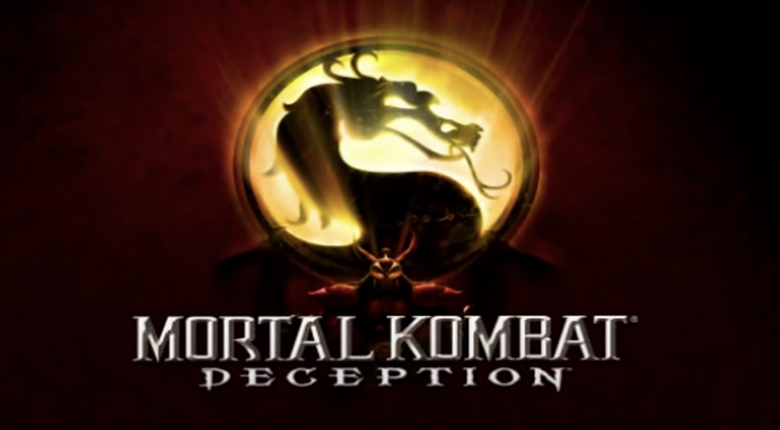 Last but not least was an ageing warrior named Shujinko, who had a personal score to settle with the Dragon King. Many years before, Onaga had contacted Shujinko from beyond the grave and tasked him with retrieving six powerful artefacts known as the Kamidogu or “tools of the gods”. Shujinko had then spent his life in pursuit of the Kamidogu under the false impression he was aiding the Elder Gods, until Onaga’s “deception” was finally revealed. Furious at the betrayal, Shujinko used his powers to destroy the Kamidogu, as well as the Dragon King himself. 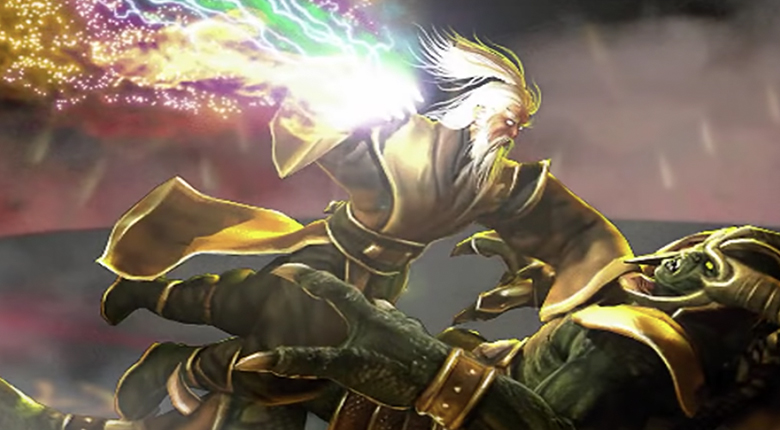 The story of Armageddon begins way back before the Mortal Kombat tournament even started, thanks to an ancient prophecy known to the Edenian rulers, Argus and Delia. Together they constructed the Pyramid of Argus, created Blaze as a warrior destined to bring balance to the realms, and sealed away their own two sons, Taven and Daegon, to be awoken in a new age for the prophesied “Battle of Armageddon”. 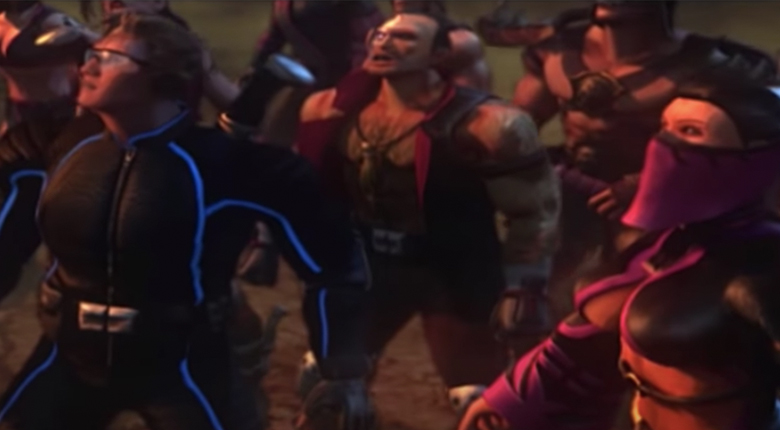 Who would compete at Armageddon? Well,  pretty much... everyone! With so many warriors revived in the last tournament and absolutely nothing resolved between themselves or the realms, the fighting erupted in an epic battle royale that caused Blaze to awaken. This also woke Taven, who felt compelled to seek out and defeat Blaze in order to settle the Armageddon conflict. 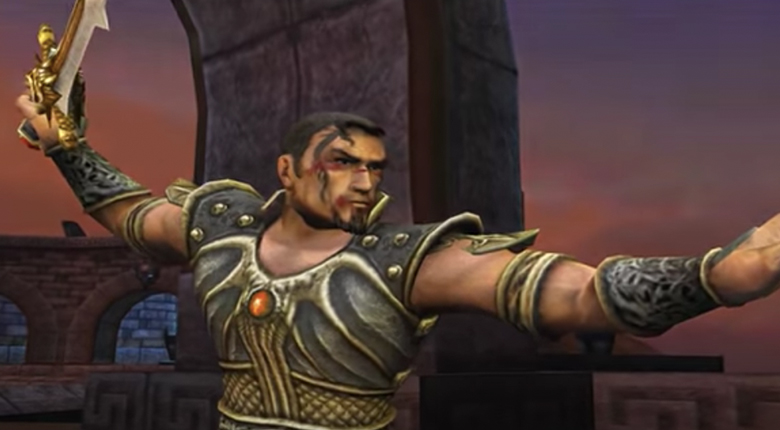 Naturally, there were some “komplications”. Daegon had awoken early, killed his parents and formed the Red Dragon clan. Upon learning this, Taven was able to defeat his brother but failed to destroy Blaze, leaving Taven among the legions of corpses in the Battle of Armageddon.
Blaze was later killed by Shao Kahn, and the fate of Earthrealm hung on one final battle between him and Raiden. Moments before Raiden’s death, the thunder god sent a message to his younger self through his amulet: “He must win”. 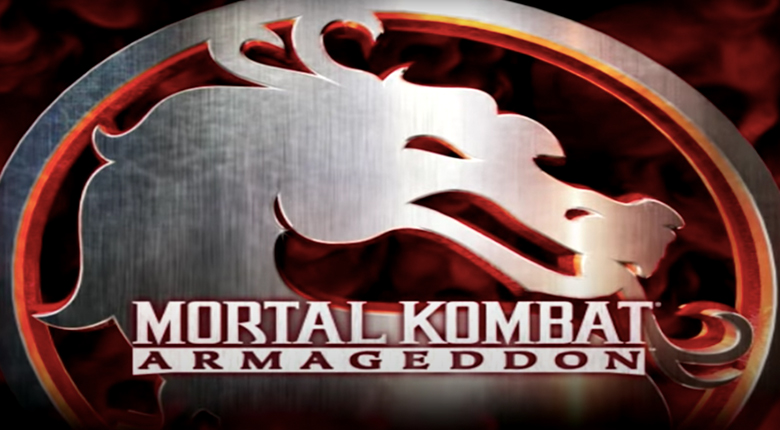 Did it work? Find out in the final part of our “komplete” history of Mortal Kombat, or jump straight into the action with Mortal Kombat 11: Ultimate.