Skip to content
On Tuesday 12th April the UK Premiere of Operation Mincemeat will take place at the Curzon Mayfair in London, ahead of the film’s release in the UK and Ireland on Friday 15th April.

In attendance will be the stars of the film Colin Firth, Matthew Macfayden, Kelly Macdonald, Penelope Wilton, Johnny Flynn, Jason Isaacs, and more.

We’re delighted to welcome a limited number of fans to watch blue carpet arrivals. To gain access to a blue carpet crowd pen you must go through the WB Green Passcard process. This process asks questions identifying anyone with symptoms of COVID and advises that they should not attend. Wristbands will be given out on location at the Curzon Mayfair from 8am Tuesday, on a first come first serve basis on successful completion of the WB Green Passcard. If you have any accessibility needs, please email events.uk@warnerbros.com in advance.

If you're not able to join us in person, then keep an eye on our @WarnerBrosUK social channels for unprecedented behind-the-scenes coverage throughout the day! 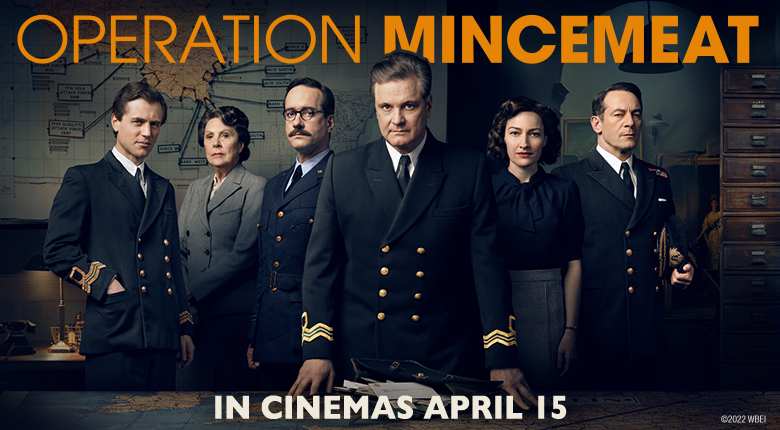 It’s 1943. The Allies are determined to break Hitler’s grip on occupied Europe, and plan to launch an all-out assault on Sicily; but they face an impossible challenge - how to protect the invasion force from potential annihilation.  It falls to two remarkable intelligence officers, Ewen Montagu (Colin Firth) and Charles Cholmondeley (Matthew Macfadyen) to dream the most inspired and improbable disinformation strategy of the war - centred on the most unlikely of secret agents: a dead man. Operation Mincemeat is the extraordinary and true story of an idea that hoped to turn the tide for the Allies - taking impossibly high risks, defying logic, and testing the nerves of its creators to breaking point.

See it in cinemas Friday, April 15.