Skip to content
Wanted in 35 countries (and counting!), here's the full story behind MK's metal-faced mercenary. 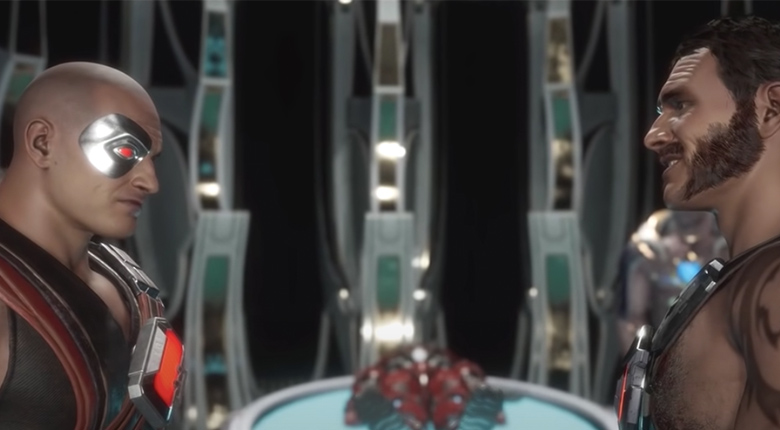 Kano has only ever been loyal to two things; himself (naturally) and the notorious Black Dragon clan composed of thieves, murderers and general scumbags. Kano’s own crime spree nearly came to an end after a botched operation left his face butchered. But, being the resourceful sort, Kano used his underworld contacts to fix up his face with some nifty hi-tech cybernetic enhancements, including his iconic laser eye.

Kano was one of the original seven fighters introduced in 1992’s Mortal Kombat, but unlike his fellow Earthrealmers, he was only in it for personal gain. By chance, Kano was the one who got the U.S. Special Forces involved in Outworld affairs, as his dirty deeds had drawn their attention and he’d been pursued to Shang Tsung’s island by one Lt. Sonya Blade. This would mark the beginning of one of Mortal Kombat’s longest running rivalries. Later, as the island began to crumble, both Kano and Sonya were captured by Shang Tsung and taken to Outworld as prisoners. 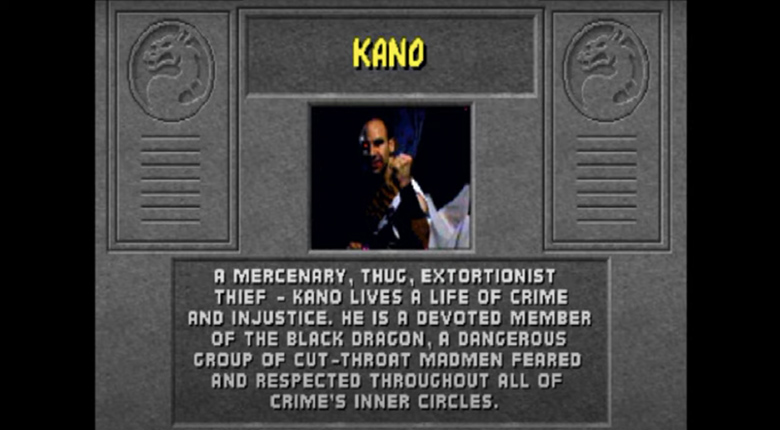 But this didn’t spell curtains for Kano, even if it did put him out of action for Mortal Kombat II. As Sonya was able to send a distress signal to her superior, it wasn’t long before Major Jax Briggs arrived in Outworld to rescue his comrade and arrest Kano. Ever the slippery little blighter, Kano escaped as soon as the trio passed through the portal and made his way back to Outworld.

It was there, not long before the events of Mortal Kombat 3, that Kano managed to cut a deal with Emperor Shao Kahn, who spared his soul in exchange for his vast knowledge of Earth’s weaponry. This was the first but by no means the last time that Kano would side with Earthrealm’s enemies. 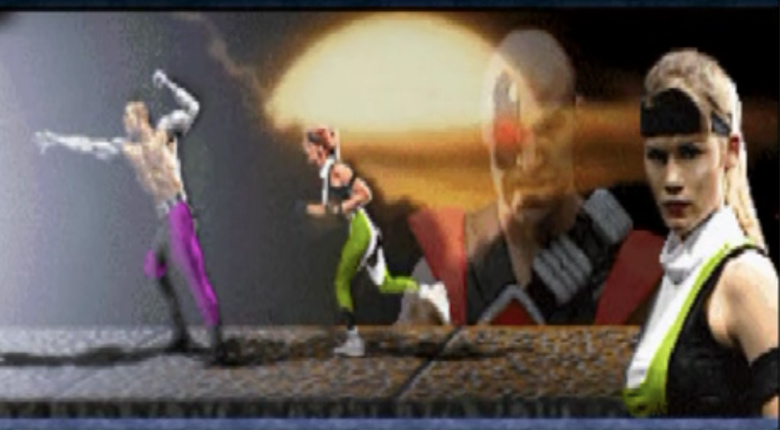 During the events of Mortal Kombat Trilogy, Kano would come face to face once again with Sonya Blade and the pair duked it out at the top of a tall skyscraper. Believing he had the upper hand, Kano was just about to finish her off when Sonya (who had only been feigning injury) hurled Kano from the roof. Somehow (as Kano is nothing if not a survivor), he lasted long enough after the fall to be found, healed and imprisoned by the Centaurian warlord Motaro.

However, Kano didn’t spend too long in the slammer before his captor was taken down by the Shokan warrior Sheeva and the two began conspiring to murder Shao Kahn. But Kano (being Kano) saw a better opportunity and betrayed his new ally at the last second, leaving Sheeva to the mercy of Shao Kahn - the emperor’s “mercy” consisting of several stab wounds to Sheeva’s chest. Kano’s “loyalty” was rewarded as Shao Kahn appointed him as general of the Outworld army. 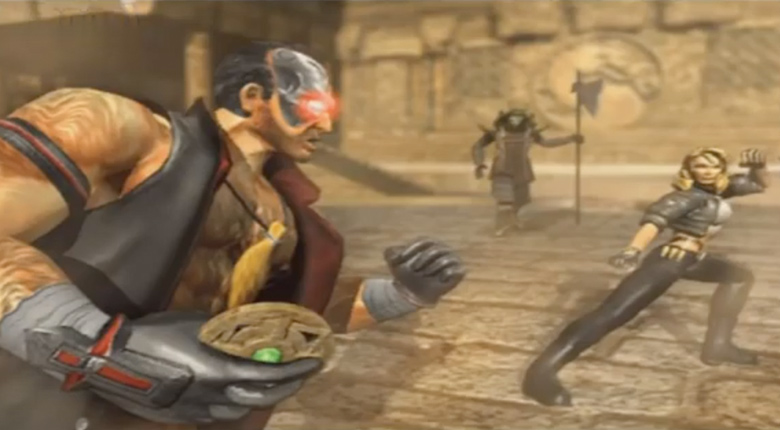 While Outworld wasn’t having the best of luck in the run up to Mortal Kombat: Deadly Alliance, Kano still managed to prove his worth as a military tactician. After narrowly holding the fort against Princess Kitana and her Edenian army, Kano returned just in time to see Shao Kahn ambushed by Shang Tsung and Quan Chi. Rather than intervene to protect his emperor, Kano decided to wait it out in the shadows and see who emerged victorious. It probably goes without saying that, after Kahn was defeated, Kano was quick to switch sides once again and pledge his allegiance to Outworld’s new rulers.

However, Kano’s new bosses turned out to be every bit as devious as himself. While he enjoyed a new position of authority along with the pleasure of enslaving a small village, the Deadly Alliance had already made a pact with Mavado of the Red Dragon clan, arch rivals of the Black Dragon, allowing him to attack Kano in exchange for eliminating Kenshi. It seemed like Mavado had made good on his offer by Mortal Kombat: Armageddon, where Kano was revealed to be a prisoner of the Red Dragon and a test subject in their experiments to create a human-dragon hybrid. As if Kano wasn’t dangerous enough already! 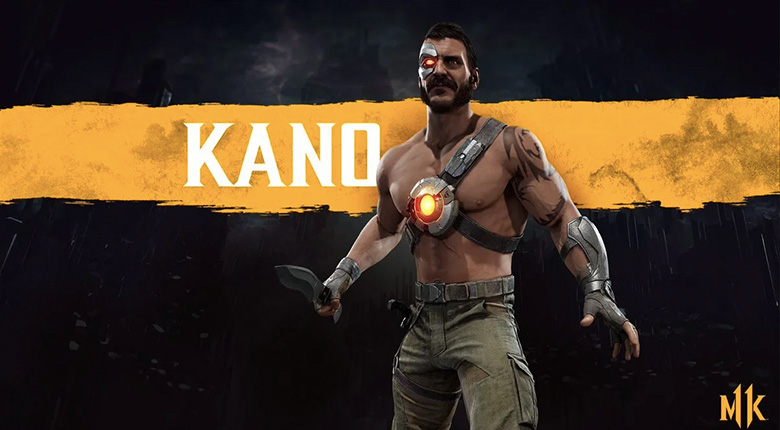 Kano’s bad old self returned for the 2011 Mortal Kombat reboot. This time, his dealings with the Special Forces were revealed to go back even further, as Sonya revealed that Kano had been working with them as an informant on the Black Dragon before (and this should come as no shock to anyone by this point) he betrayed them and led their troops into a deadly trap. On Shang Tsung’s island, he then attacked both Sonya Blade and Johnny Cage who quickly put their own differences aside to fend off Kano. Looking back, he might just have caused a spark between those two!

Fast forward to Mortal Kombat X and we see that Kano has done pretty well for himself, having made a small fortune selling Shinnok’s amulet to Mileena and standing to make even more by assassinating Kotal Kahn. The plot failed, but Kano once again managed to escape with his life. He was next seen in disguise as an Outworld refugee, but that didn’t fool his old foe Sonya, who spotted him straight away. He first tried bargaining with information in exchange for his freedom, before “Uncle Kano” started threatening Sonya and Johnny’s daughter, Cassie Cage. Needless to say, Sonya was not amused and almost strangled Kano to death in retaliation before being persuaded to let him live.

We won’t say too much about Kano’s story arc in Mortal Kombat 11 for those who haven’t played it yet, except that the timeline disruption gives us the unique experience of having two Kanos interact. 90s Kano is definitely impressed to see himself “over fifty and still a ripper”. But will this be the team-up to end all team-ups, or will Kano end up stabbing himself in the back for a change? 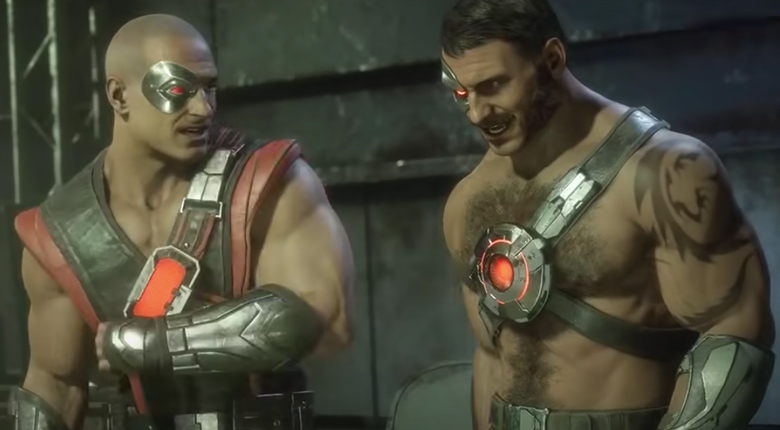 That was the story of Kano, Mortal Kombat’s lovable rogue, minus the “lovable” part. He may be an absolute scoundrel, but where’s the fun in a fair fight?