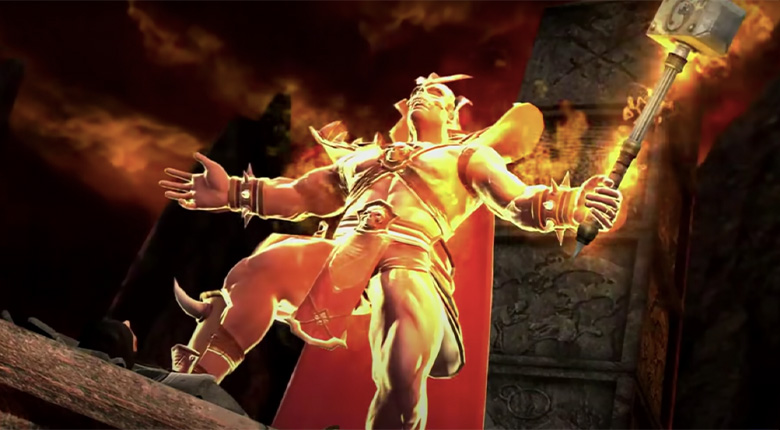 Where do you go after Armageddon? Back in time, of course! Mortal Kombat opened with a scenic view of our heroes’ dismembered corpses, as Raiden battled on to save Earthrealm. About to go under the hammer (Shao Kahn’s hammer, to be precise), Raiden sent the message to his younger self that “he must win”. In hindsight, he probably should have been more specific.

We then snapped back to the events of the first game, as younger Raiden mentioned having “strange visions” and Liu Kang noticed a crack in his amulet. But there was no time for speculation, as Shang Tsung’s tournament was about to begin. 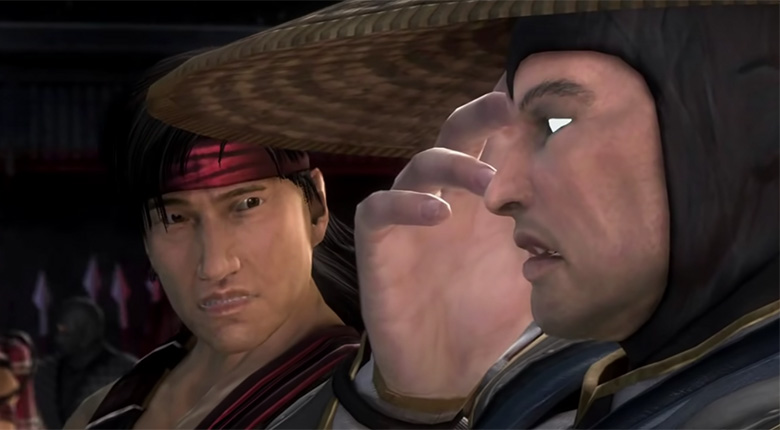 Raiden shared his visions with some of the competitors, believing they were all somehow connected to Earthrealm’s fate. He warned them that Shao Kahn would become invincible and destroy all life on Earthrealm. But, while Raiden believed his visions were key to defeating Shao Kahn, he warned that “disrupting the flow of time can have serious consequences”.

At times, it seemed like history was doomed to keep repeating itself anyway. For instance, after Raiden urged Scorpion not to kill Sub-Zero, Scorpion went ahead and pulled his head off anyway. And despite warning Cyrax about the secret Cyber Initiative, the Lin Kuei still proceeded with their plans, although this time Smoke was spared and Sub-Zero underwent the transformation. 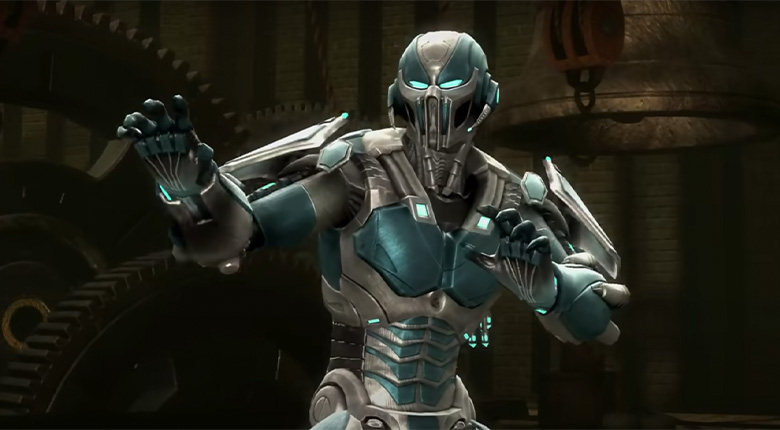 But of course, the most important outcome for Raiden was that Liu Kang won the tournament for Earthrealm. However, even as the events played out and Liu Kang defeated Shang Tsung, Raiden noticed yet another crack in his amulet. Something still wasn’t right…

Having doubts that Liu Kang was indeed the “he” who “must win”, Raiden nominated Kung Lao as his champion in the Outworld tournament. But, straight after beating both Shang Tsung and Quan Chi in combat, Kung Lao had his neck unceremoniously snapped by Shao Kahn. Furious at seeing his friend murdered, Liu Kang responded by literally putting his fist through Shao Kahn. Maybe Raiden should have stuck with his gut feeling after all? Still, it wasn’t long before Shao Kahn was back in business, with resurrection magic being one of the obvious perks of employing a dark sorcerer or two. 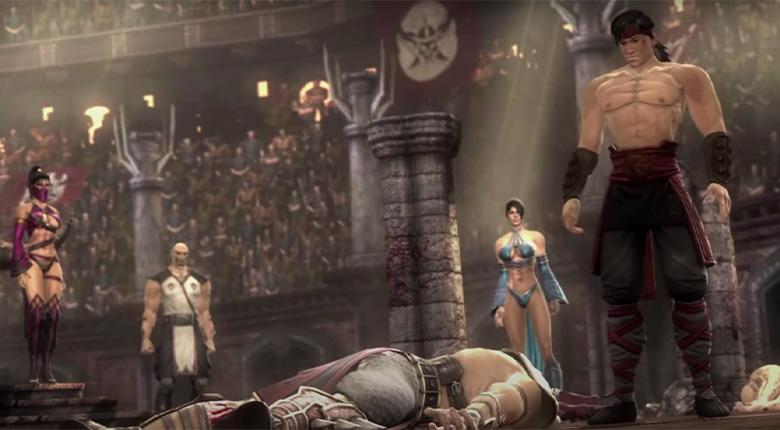 As the cracks continued to show and the Outworld invasion began, Raiden pleaded for help from the Elder Gods, but to no avail. By now, Liu Kang was losing faith in Raiden’s plans, especially after he witnessed the death of Princess Kitana.

In a last-ditch effort to save Earthrealm, Raiden went to Netherrealm to negotiate with Quan Chi, with Kang now sure that the thunder god was losing his mind. Raiden attempted to make a bargain with the sorcerer by offering him all the souls of the warriors who died in combat. Quan Chi scoffed at the deal before revealing his already-sizable revenant army, courtesy of a similar bargain he’d had going with Shao Kahn. After fighting off Quan Chi’s revenants (zombie-like versions of those who’d died), a corrupted Kitana reminded Raiden that it was his actions that condemned them all. Harsh words indeed. 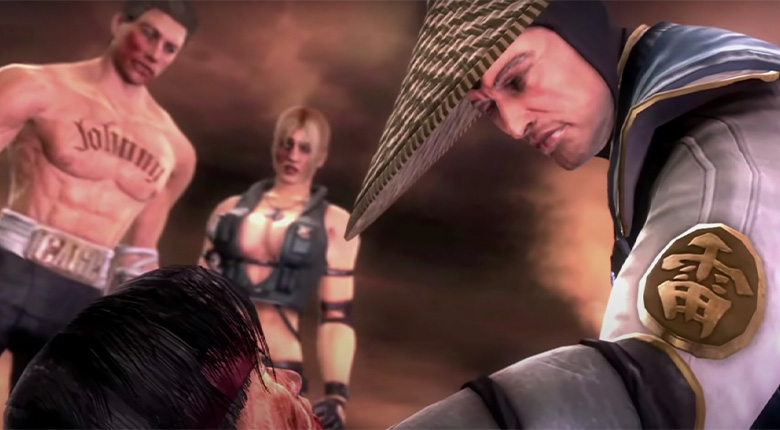 It was then that Raiden had an epiphany - the “winner” must be Shao Kahn, as the Elder Gods would punish him the second he tried to merge the realms. Apparently the invasion itself was fine by them, but merging realms would be a step too far. Liu Kang thought this plan was insane and fought against Raiden, who accidentally killed the Shaolin monk in the process. He left Raiden with the damning words, “you… have killed us… all”, which was probably the last thing he wanted to hear. 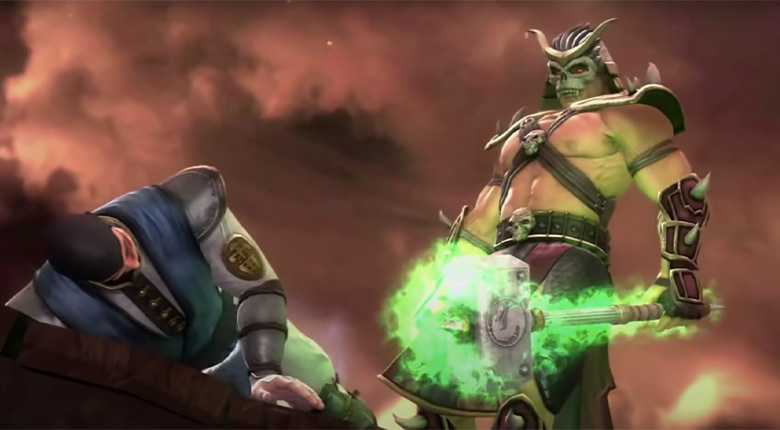 With no other opponents left standing, Shao Kahn prepared to clobber Raiden with his hammer and merge the realms, pretty much exactly as he’d been doing in the opening scene. However, the Elder Gods intervened (better late than never) and annihilated the Outworld emperor.

Raiden, Johnny Cage and Sonya Blade were left standing battered and bruised in a free Earthrealm. Raiden’s amulet repaired itself, and the three warriors were left to mourn their losses and start rebuilding their world. 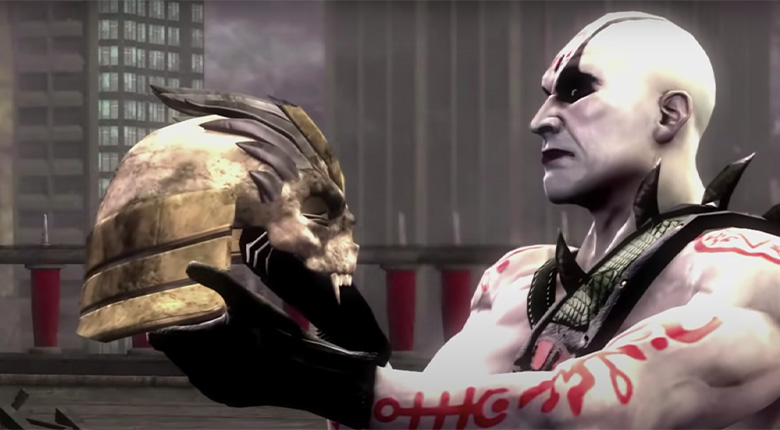 ​
However, the last shot showed Quan Chi picking up Shao Kahn’s mask, assuring Lord Shinnok that his plan had “worked to perfection”. It seemed that Netherrealm and the fallen god posed the real threat all along.

Shao Kahn’s invasion and death had all been part of Shinnok’s plan. His ultimate goal was to escape the Netherrealm and resume his war against the Elder Gods. And while we knew that, no-one in Earthrealm was any the wiser! 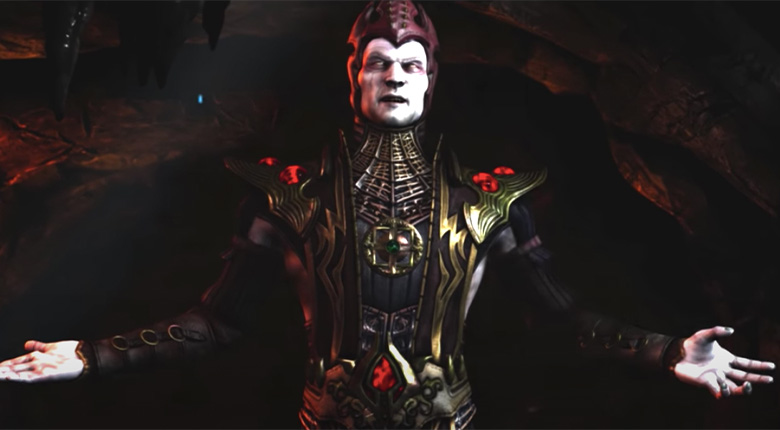 Mortal Kombat X opened with Sonya Blade, Johnny Cage and Kenshi Takahashi heading to Raiden’s temple, where an escaped Shinnok planned to poison Earthrealm’s life force, or “Jinsei”. After being faced with some of their fallen friends, now in their revenant forms, our heroes confronted Shinnok and Quan Chi.

After seeing Sonya in mortal danger, Johnny Cage unleashed a strange power that granted him the power to fight Shinnok. He would later discover that he had descended (in his own words) from “some Mediterranean war cult” and Raiden theorised that seeing a loved one in peril was what activated the green halo. 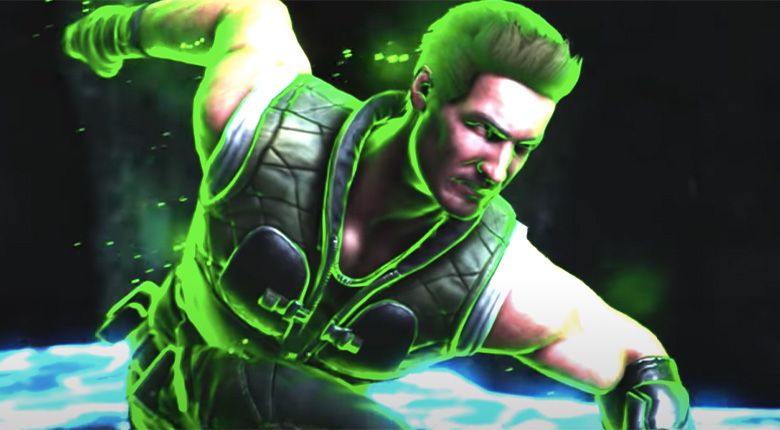 Raiden trapped Shinnok within his own amulet, however Quan Chi still managed to evade capture. Knowing the danger posed by an angry and corrupted Elder God, Fujin declared that “Shinnok can never escape”.

So, here’s how Shinnok managed to escape…

Twenty years after Shinnok’s capture, and being well aware that the original Earthrealm defenders weren’t getting any younger, Johnny Cage had assembled a new team of up-and-coming combatants. His recruits were Specialist Jacqui Briggs, Takeda Takahashi of the Shirai Ryu, a relative of Kung Lao’s known as Jin, and his own daughter, Cassie Cage. Unfortunately for Johnny, things hadn’t worked out between him and Cassie’s mother, now known as “General” Sonya Blade. 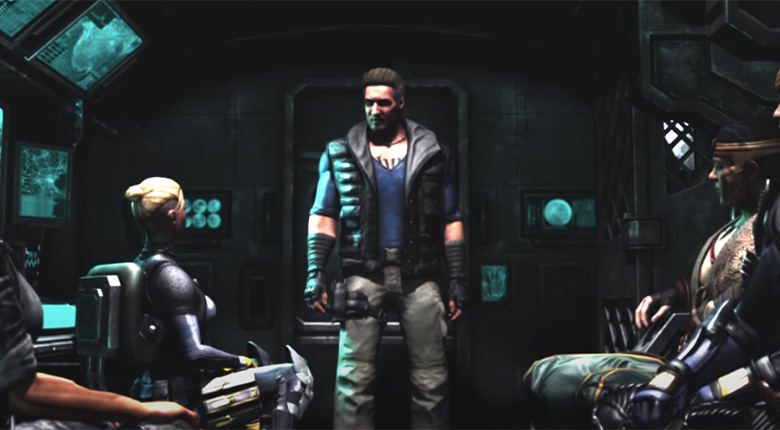 Over on Outworld, the new emperor Kotal Kahn had been trying to maintain order in the face of a rebellion led by Mileena. As the former emperor’s (sort of) daughter, she believed that Outworld’s throne was rightfully hers, and managed to rally support by offering to free Edenia from Outworld’s rule.

Mileena used Kano, Rain and Tanya to stage an assassination attempt on Kotal’s life, which didn’t quite work but certainly made an impression. Here, she also unleashed her secret weapon - a strange amulet that appeared to vaporise those hit by its blast. 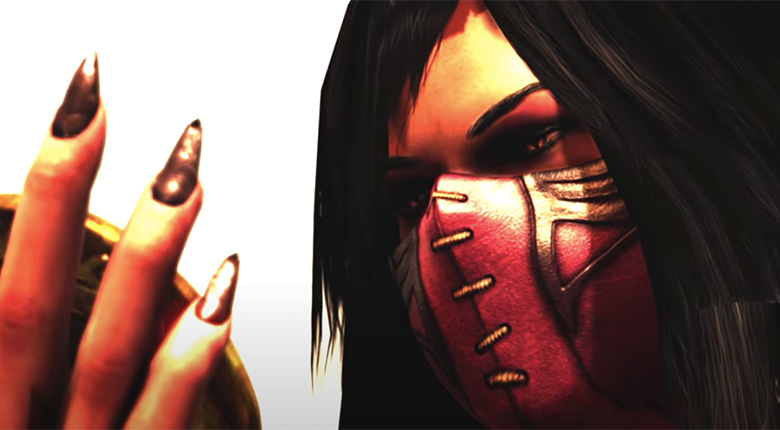 Johnny’s team were sent on a mission to bring in the Lin Kuei Grandmaster Sub-Zero, who had been restored to his non-revenant, non-cyber self. Sub-Zero had been in on the plan the entire time, which was basically an elaborate team-building exercise. Upon their return, they met an Outworld refugee named Li Mei who informed them of Mileena’s scary new jewellery and the reappearance of Kano.

Sonya went after the Black Dragon herself, because apparently some grudges never die, and dispatched the young team to Outworld to investigate. Despite managing to run afoul of Kahn’s mercenary Erron Black and the symbiote pair of Ferra and Tor, Jin was able to secure Kotal Kahn’s assistance in stopping Mileena. 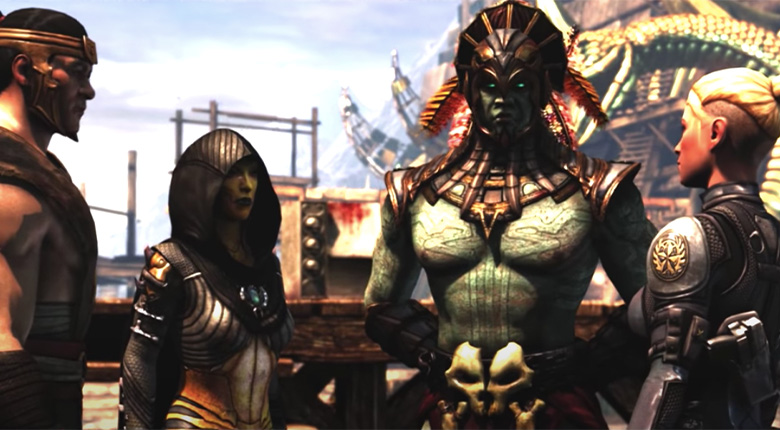 Despite her initial resistance and general distrust of the Earthrealm team, Khan’s first minister D’Vorah assisted them in tracking and capturing Mileena. After successfully retrieving both the rebel and the troublesome amulet, they were then treated to the sight of D’Vorah executing Mileena by having a swarm of bugs eat her face. Rebellion over! However, Kotal Kahn quickly changed his mind about the whole assisting Earthrealm deal, deciding instead to keep the amulet and hold the team hostage.

But Kahn had a slightly more pressing problem, as D’Vorah was secretly supporting Shinnok. Upon discovering that the Earthrealm team had escaped and D’Vorah had stolen the amulet, Kotal concluded that his first minister must be working undercover for Raiden. Kotal set off to launch an attack on Earthrealm to recover the amulet. 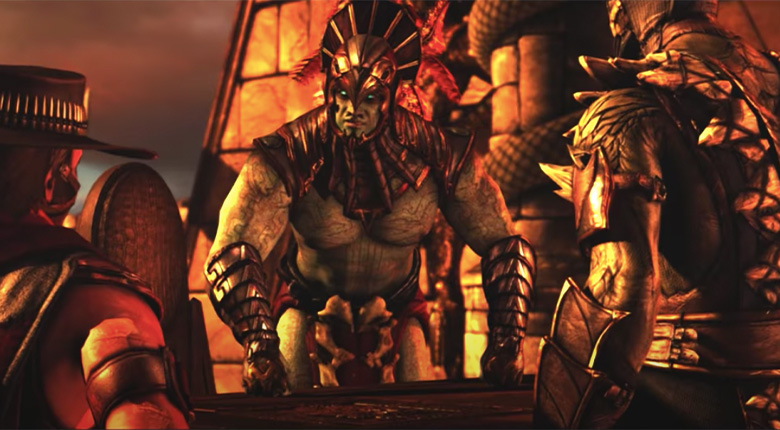 An Outworld invasion wasn’t Earthrealm’s only issue at hand. With their plans set in motion and Shinnok’s amulet within their grasp, Quan Chi and his revenants saddled up and set out to attack the Special Forces. Jax and Kenshi, aided by Quan Chi’s former assistant Sareena, launched a preemptive assault on Netherrealm, during which they managed to apprehend a weakened Quan Chi.

But upon taking their prisoner back to Earthrealm, they discovered that Hanzo Hasashi (the fully-restored, human version of Scorpion) had infiltrated their camp and was hungry for revenge on Quan Chi. Just moments before Hasashi liberated the sorcerer’s head from his neck, D’Vorah appeared with the amulet and Shinnok was summoned. 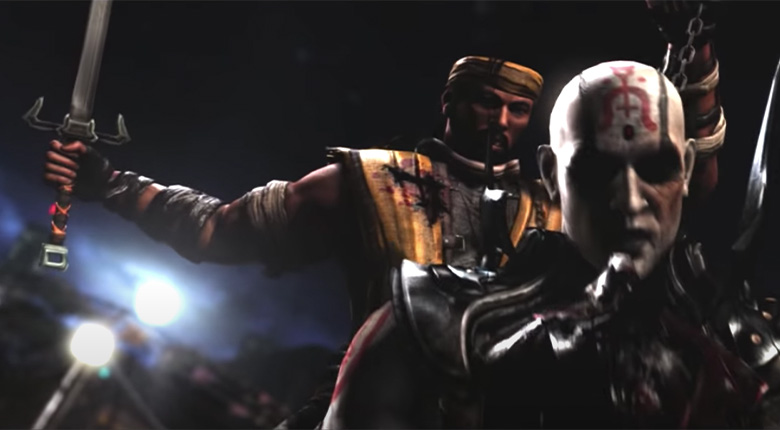 Shinnok and D’Vorah took Johnny Cage hostage and headed for the Sky Temple. As the revenants attacked Raiden and Bo’ Rai Cho, Shinnok used the Jinsei to absorb Earthrealm’s power and morph himself into a big, scary demon.

Led by Cassie Cage, the Earthrealm team went after Shinnok but were attacked by Kotal Kahn’s army. In Kotal’s mind, Earthrealm was already a write-off, and taking down its defenders would be an easy way into Shinnok’s good books. Luckily, the Lin Kuei clan came to the rescue, allowing the team to make a break for the Sky Temple.

In the Jinsei Chamber, Cassie found her dad about to be devoured by bugs (no prizes for guessing who did that) and set about squishing D’Vorah. The corrupted Shinnok then attacked Johnny, which gave Cassie the glow-up she needed to defeat him. In her words, he “got Caged”. 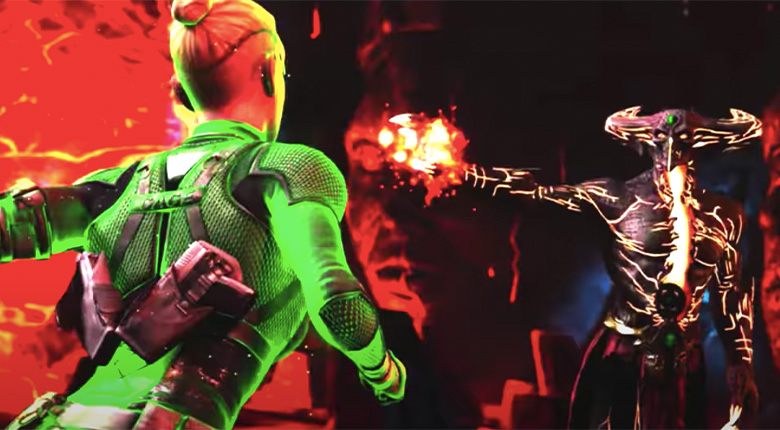 Cassie then answered the wounded Raiden’s request to place him in the Jinsei, where he cast a spell that removed Shinnok’s power. We saw a happy Cage family reunion, Takeda and Jacqui got cosy together, and all seemed well in Earthrealm once more.

Well, maybe not quite. The final scene showed us a much darker version of Raiden, who was no longer content with merely defending Earthrealm and would instead attack and destroy its enemies. And, just for good measure, he threw down Shinnok’s still-moving head in front of Liu Kang and Kitana. Your move, Netherrealm! 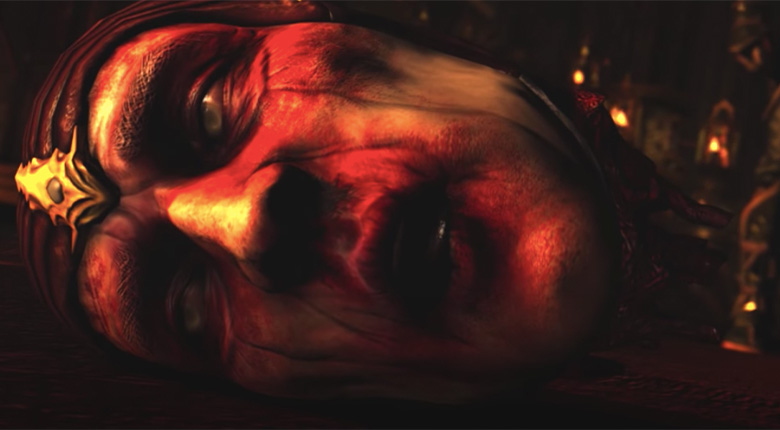 This brings us right up to speed with the latest chapter in the saga, Mortal Kombat 11. Thanks to his actions in the previous story, along with a full-on Netherrealm invasion, “Dark Raiden” managed to attract the attention of Kronika, the keeper of time. Not only did she have the power to control time and rewrite history, but she also happened to be Shinnok’s mother. So, Raiden wasn’t exactly her favourite person! 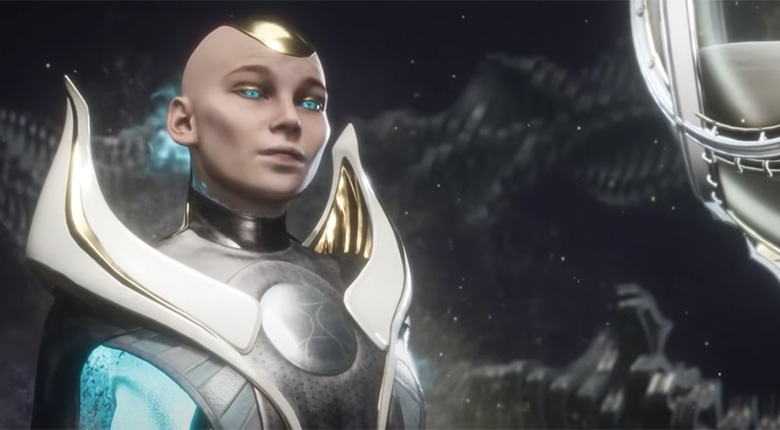 Kronika already had some powerful allies in her henchman Geras and her daughter Cetrion, yet she managed to gain more support for her side in the revenant Liu Kang and Kitana (now the self-appointed King and Queen of Netherrealm) and in Sektor, who began creating Kronika a new army of Cyber Lin Kuei.

The ensuing time storm also had the bizarre side effect of transporting younger versions of combatants into the current timeline, including Raiden, Liu Kang, Shao Kahn, Sonya, Kano and many more. Some ended up working in tandem with their older versions, some found out that their future selves were already dead, and some even had the surreal experience of meeting their already fully-grown future children. Because when time goes awry, anything can happen. 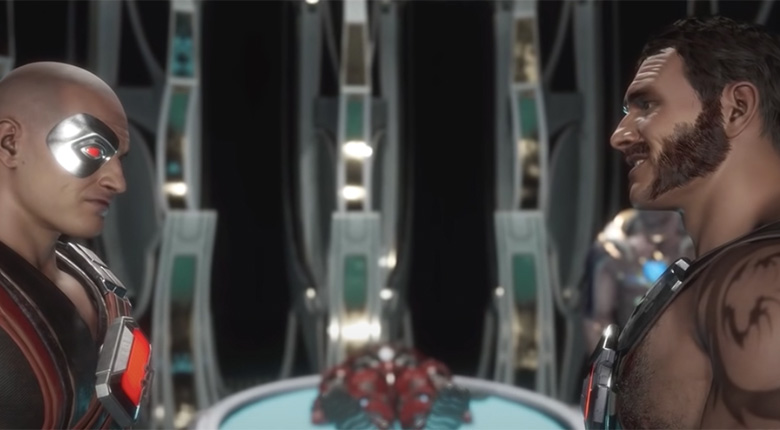 Of course, we wouldn’t want to spoil every twist and turn for you. Thankfully, the new Mortal Kombat 11: Ultimate has it all - every fighter, every finisher, and the full epic adventure, including the extended “Aftermath” pack that sees the story “kontinue” even further.

This “koncludes” our history of Mortal Kombat. Thank you for playing!