Skip to content
Today marks the beginning of Most Joyous Month! Four weeks of bodacious fun over on @BillandTedUK Twitter and across WB UK social channels is coming your way. Join us as we celebrate the return to the screen of the most triumphant duo that is Keanu Reeves and Alex Winter in Bill & Ted Face the Music, coming to UK cinemas September 16. 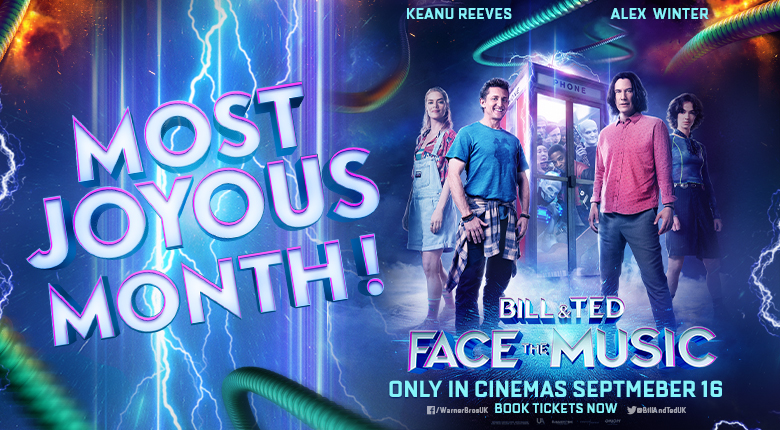 ​What’s to come during Most Joyous Month you ask? Look out for merch competitions, featurettes and film clips, behind the scenes content, as well as Bill & Ted’s Guide to Being Excellent, phone wallpapers, and Wednesday Wisdom Bill & Ted style.

Go behind the scenes of the world’s most triumphant duo in our first featurette of Most Joyous Month! Find out what it is that makes Keanu and Alex the iconic Bill and Ted.


In Bill & Ted Face the Music the stakes are higher than ever for the time-traveling exploits of William "Bill" S. Preston Esq. and Theodore "Ted" Logan. Yet to fulfill their rock and roll destiny, the now middle aged best friends set out on a new adventure when a visitor from the future warns them that only their song can save life as we know it. Along the way, they will be helped by their daughters, a new batch of historical figures, and a few music legends — to seek the song that will set their world right and bring harmony in the universe. This is a movie about the importance of unity, the power of friendship and what you can achieve when faced with insurmountable odds.

Bill & Ted Face the Music lands in UK cinemas September 16. Their destiny is calling, dudes! Until then, follow @BillandTedUk for all the most excellent updates and book your tickets now!