Long before we embarked on the adventures of everyone’s favourite Fellowship in The Lord of the Rings, and a little after Bilbo went there and back again in The Hobbit, there was Talion. A ranger for the valiant kingdom of Gondor, Talion was the chivalrous Captain of the Black Gate, which protects the kingdom of men from the Mordor army (this is the gate where the final battle takes place in The Return of the King!).

As well as guarding this gate, Talion is a family-man, taking care of his son, Dirhael, alongside his wife, Loreth, even teaching his son swordsmanship! But Sauron’s forces have other ideas for the Black Gate (outside of it being a cosy family home). They attack in force, led by three fearsome figureheads: the Hammer, the Tower and the Black Hand. The trio, in an attempt to summon a powerful wraith, slay all guarding the black gate including Talion and his family.

However, it’s Talion who wakes, somehow bound to the summoned wraith (talk about rude awakening!). The wraith turns out to be the spirit of an old elf named Celebrimbor, giving Talion all kinds of powers including immortality and the ability to dominate the many Uruks in Mordor. What does Talion use this for? Revenge, of course! This dynamic duo hunt down Sauron’s servants, killing both the Hammer and the Tower, before coming up against the Black Hand himself…

In the ensuing battle, the Black Hand reveals himself as the physical embodiment of Sauron, meaning Talion and Celebrimbor must draw on their combined power (and an army of dominated Uruks) in order to defeat him, and even then it’s only temporary. The two decide that the only way to truly defeat Sauron is to forge a new ring of power to rival his power. 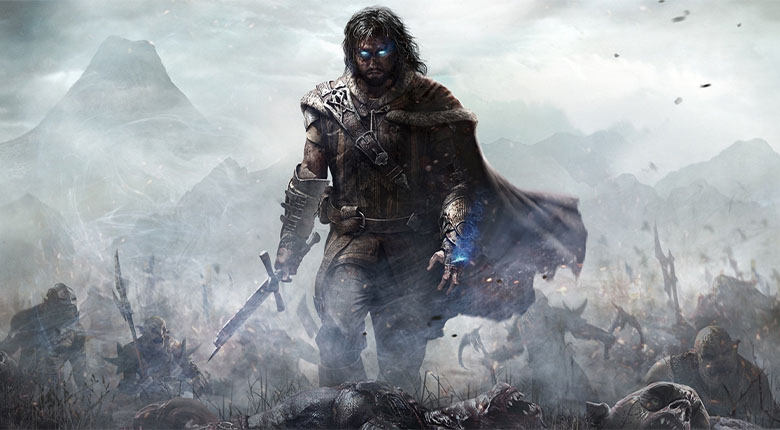 So, who is this Celebrimbor?

Celebrimbor ruled a little land called Eregion and was a master blacksmith, his name even means “Silver Fist.” He’s the descendant of a hero named Feanor who fought against Morgoth (imagine Sauron, but worse). In the Second Age a mysterious visitor entered Eregion, named Annatar, which in Elvish means “Lord of Gifts” (Sounds great right?). This silver-tongued visitor manages to befriend blacksmiths in Eregion and teaches them how to forge rings, which worries Celebrimbor (perhaps a little jealous?). Annatar and his blacksmith friends manage to forge a few special rings. But in secret, Annatar had been working on his own ring and no ordinary ring at that, this is the infamous One Ring to bind all other rings! With this ring forged Annatar revealed himself as Sauron. The elves, rightly disgruntled at this deception, hide all their rings from Sauron. This doesn’t turn out to be a great move in the long run, as Sauron decides to start a war for them (quite a gold digger!).  Three of these hidden rings were made by our favourite wraith Celebrimbor, named Nenya, Narya and Vilya, but we’ll get to those later. Sauron’s attack on Eregion proves successful, besting the blacksmiths and capturing Celebrimbor in one fell swoop!

Sauron does his best to lure out the hidden rings by torturing Celebrimbor, and ultimately killing him, before he could reveal the location of those three special rings he’d made. To hide those powerful rings (the ones we mentioned earlier), he gave them to other powerful elves for safe keeping. The high king of the elves, Gil-Galad, was given Vilya and the remaining two were given to the lady of Lorien, Galadriel. Both of these characters, and all their rings, feature in the films so keep an eye out! 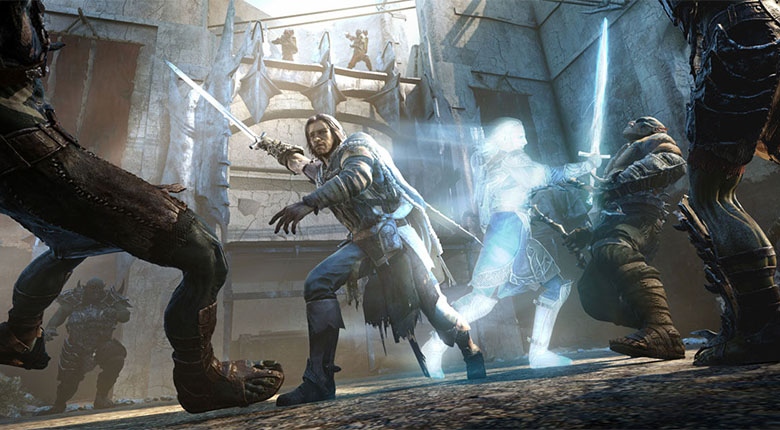 The story of Shadow of War kicks off right after its predecessor, with Talion and Celebrimbor having forged a new ring of power to rival Sauron’s One Ring. After that triumphant moment though, Celebrimbor’s wraith spirit is stolen from Talion with dark magic. Talion, who can’t survive without the wraith, goes after him to find a being known as Shelob. While Shelob appears to Talion in the form of a woman, she is actually a giant magical spider (the same spider that hunts down Frodo in The Return of the King). The two make a deal that she will return Celebrimbor to Talion in exchange for their ring of power. As a token of good faith the spider sends the duo to Minas Ithil where they can find a Palantir. Palantirs are powerful objects that allow users to see across all Middle-Earth, and communicate with each other (like a magical medieval telephone), this is exactly what Sauron and Saruman do in the events of The Lord of the Rings! In the process however, we see that the duo have different ideas, with Talion favouring protecting his fellow soldiers of Gondor while Celebrimbor is more interested in the Palantir…

Interrupting the little lover’s quarrel is General Castimir, who betrays them by allowing the Witch King’s forces through the fort’s gates. With Minas Ithil under control of the Witch King, he renames it Minas Morgul, which is where Frodo is captured much later. The Palantir reveals to the Witch King that Shelob holds the ring of power and so he seeks to take it from her. At this point Eltariel, an elven assassin from Lorien (Where Galadriel lives), helps Talion and Celebrimbor escape the fallen city. Together, they save Shelob from the Nazgul and she returns the ring to Talion and the wraith out of gratitude. With their ring returned, Talion raises an army to aid the remaining Gondorians in reclaiming Minas Morgul. They take over the fortress, killing a Balrog and one of the Nazgul in the process. It turns out that this Nazgul is actually Isildur, former prince of Gondor (clearly not doing so well after he was killed by orcs). The duo’s victory doesn’t last long though as Celebrimbor, wanting to corrupt Isildur rather than put him out of his misery, decides to replace Sauron, rather than simply defeat him. Celebrimbor separates from Talion, teaming up with Eltariel to beat Sauron. Left for dead, Talion uses Isildur’s ring to survive, which allows him to defeat the Witch King (Handy!). Talion takes the Palantir and witnesses an everlasting battle between Celebrimbor, Eltariel and Sauron. This battle takes the form of a flaming eye atop the tower of Baradur.

With Isildur’s ring, Talion tries to hold Minas Morgul from Sauron but only ends up becoming a Nazgul himself, just in time for the events of The Lord of the Rings. 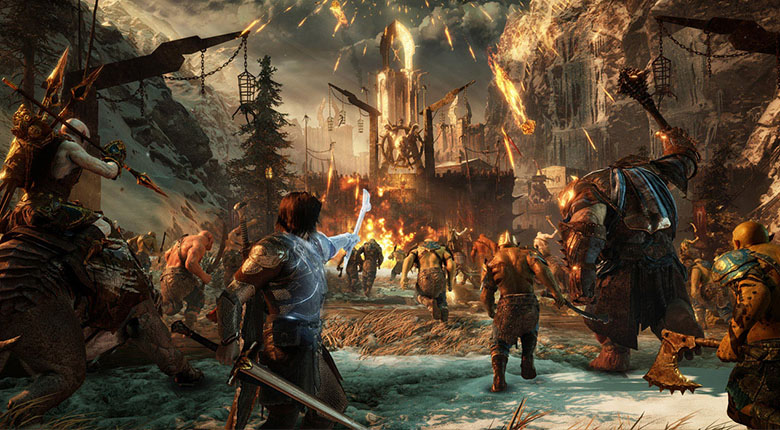 Who is Shelob and Ungoliant?

Ungoliant’s origins are unknown, coming from ‘the Darkness’ beyond the world itself. She teamed up with Morgoth and took the form of a gigantic spider, helping him execute evil plots such as poisoning the Two Trees of Valinor, sacred to the Valar (the race that created the world of Arda and Middle-Earth). Their relationship ended up being tumultuous to say the least and a great battle broke out after they fell out, in which Morgoth summoned his army of Balrogs (it only took one of these guys to defeat Gandalf in Moria!) to defeat Ungoliant. Ungoliant retreated and went on to breed with other great spiders, which spawned Shelob, who kept some of her mothers’ strange powers. 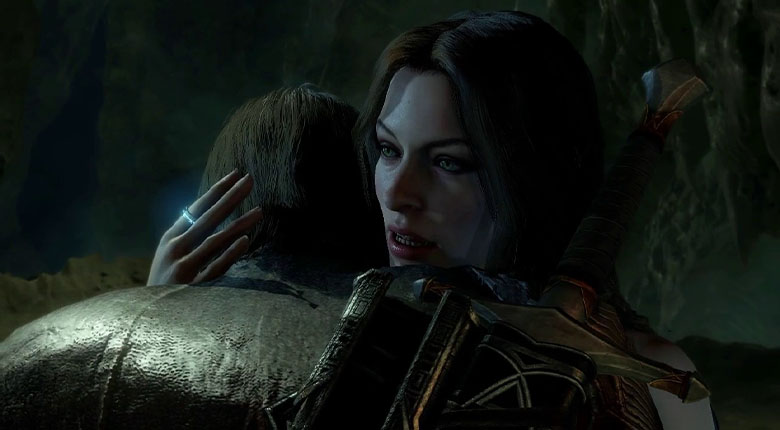 Where does this fit into the stories from the Third Age?

Although the Shadow games aren’t strictly part of the canon, these expand the universe in their own way, while still weaving into The Hobbit and The Lord of the Rings. As we’ve mentioned, many of the characters featured in the games are plucked directly from the lore of the films and books themselves, appearing as friends or enemies to Talion on his journey. This journey weaves into the story featured in the games and films however, with Talion becoming one of the Nazgul that so relentlessly pursues Frodo, and the flaming eye being a consistent feature in the films. It is only after Frodo destroys the One Ring that Talion is liberated from his servitude as a Nazgul, resuming his human form to find peace.