A powerful and thought-provoking true story, Just Mercy follows young lawyer Bryan Stevenson (Jordan) and his history-making battle for justice. After graduating from Harvard, Bryan could have had his pick of lucrative jobs. Instead, he headed to Alabama to defend those wrongly condemned, with the support of local advocate Eva Ansley (Larson). One of his first cases was Walter McMillian (Foxx), who, in 1987, was sentenced to die for the notorious murder of an 18-year-old girl, despite a preponderance of evidence proving his innocence and the fact that the only testimony against him came from a criminal with a motive to lie. In the years that follow, Bryan becomes embroiled in a labyrinth of legal and political manoeuvrings and overt and unabashed racism as he fights for Walter, and others like him, with the odds—and the system—stacked against them.

In cinemas: January 31
Directed by: Clint Eastwood
Starring: Sam Rockwell, Kathy Bates, Jon Hamm, Olivia Wilde, Paul Walter Hauser
Directed by Clint Eastwood and based on true events, Richard Jewell is a story of what happens when what is reported as fact obscures the truth.
“There is a bomb in Centennial Park. You have thirty minutes.”  The world is first introduced to Richard Jewell as the security guard who reports finding the device at the 1996 Atlanta bombing—his report making him a hero whose swift actions save countless lives.  But within days, the law enforcement wannabe becomes the FBI’s number one suspect, vilified by press and public alike, his life ripped apart.  Reaching out to independent, anti-establishment attorney Watson Bryant, Jewell staunchly professes his innocence.  But Bryant finds he is out of his depth as he fights the combined powers of the FBI, GBI and APD to clear his client’s name, while keeping Richard from trusting the very people trying to destroy him.

BIRDS OF PREY (AND THE FANTABULOUS EMANCIPATION OF ONE HARLEY QUINN)

In Cinemas: February 7
Directed by: Cathy Yan
Starring: Margot Robbie, Mary Elizabeth Winstead, Jurnee Smolett-Bell, Rosie Perez, Chris Messina, Ewan Mcgregor, Ella Jay Basco
You ever hear the one about the cop, the songbird, the psycho and the mafia princess? Birds of Prey (And the Fantabulous Emancipation of One Harley Quinn) is a twisted tale told by Harley herself, as only Harley can tell it.
When Gotham’s most nefariously narcissistic villain, Roman Sionis, and his zealous right-hand, Zsasz, put a target on a young girl named Cass, the city is turned upside down looking for her. Harley, Huntress, Black Canary and Renee Montoya’s paths collide, and the unlikely foursome have no choice but to team up to take Roman down.

FINDING THE WAY BACK

In cinemas: Coming soon
Directed by: Gavin O’Connor
Starring: Ben Affleck, Al Madrigal, Michaela Watkins, Janina Gavankar, Glynn Turman
Jack Cunningham (Ben Affleck) once had a life filled with promise.  In high school, he was a basketball phenom with a full university scholarship, when suddenly, for reasons unknown, he walked away from the game, forfeiting his future.  Now years later, Jack is spiraling down, triggered by an unspeakable loss, and drowning in the alcoholism that cost him his marriage and any hope for a better life.
When he is asked to coach the basketball team at his alma mater, which has fallen far since his glory days, he reluctantly accepts, surprising no one more than himself.  As the boys start to come together as a team and win, Jack may have finally found a reason to confront the demons that have derailed him.  But will it be enough to fill the void, heal the deep wounds of his past, and set him on the road to redemption? 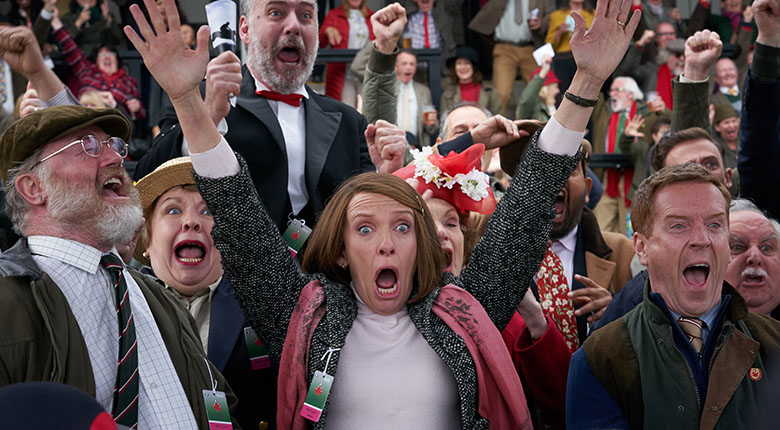 Jan Vokes (Toni Collette), a cleaner and bartender, recruits her initially reluctant husband Brian (Owen Teale) and local accountant Howard Davies (Damian Lewis) to help her bring together a syndicate of local people to breed a foal - which they name Dream Alliance.
On the racetrack, he proves himself to be more than a match for the multi-million pound racehorses he comes up against – a true working-class champion, taking on the establishment at their own game. But much more than this, Dream begins to alter the lives of everyone in the syndicate, not least Jan’s. He is everything to her: friend, confidant and an escape from a life of always putting other people’s needs first.

In cinemas: Coming soon
Directed by: Tony Cervone
Starring: Zac Efron, Will Forte, Gina Rodriguez, Amanda Seyfried, Mark Wahlberg, Frank Welker
The first full-length animated Scooby-Doo adventure for the big screen is the never-before told stories of Scooby-Doo’s origins and the greatest mystery in the career of Mystery Inc.
“SCOOB!” reveals how lifelong friends Scooby and Shaggy first met and how they joined with young detectives Fred, Velma and Daphne to form the famous Mystery Inc. Now, with hundreds of cases solved and adventures shared, Scooby and the gang face their biggest, most challenging mystery ever: a plot to unleash the ghost dog Cerberus upon the world.  As they race to stop this global “dogpocalypse,” the gang discovers that Scooby has a secret legacy and an epic destiny greater than anyone imagined.
JUNE

In cinemas: August 14
Directed by: Patty Jenkins
Starring: Gal Goldot, Kristen Wiig
Fast forward to the 1980s as Wonder Woman's next big screen adventure finds her facing two all-new foes: Max Lord and The Cheetah.
Superstar Gal Gadot and director Patty Jenkins reunite for more epic action and adventure featuring Diana the Amazonian warrior princess and her ongoing crusade for justice, equality, wisdom and peace. Building on the success of the original's $800 million worldwide box-office, which ranks as the most successful female-directed film of all time, the iconic female heroine returns – this time to face the Super Villain known as Cheetah (Wiig)

BILL AND TED FACE THE MUSIC

THE CONJURING: THE DEVIL MADE ME DO IT

In cinemas: September 11
Directed by: Michael Chaves
Starring: Patrick Wilson, Vera Farminga, Ruairi O’Connor, Sarah Catherine Hook, Julian Hilliard
“The Conjuring: The Devil Made Me Do It” reveals a chilling story of terror, murder and unknown evil that shocked even experienced real-life paranormal investigators Ed and Lorraine Warren.  One of the most sensational cases from their files, it starts with a fight for the soul of a young boy, then takes them beyond anything they’d ever seen before, to mark the first time in U.S. history that a murder suspect would claim demonic possession as a defence.

In cinemas: Oct 16
Directed by: Robert Zemeckis
Starring: Anne Hathaway, Stanley Tucci, Octavia Spencer, Charles Edwards, Chris Rock, Angus Wright
Based on Roald Dahl's 1983 classic book 'The Witches', the story tells the scary, funny and imaginative tale of a seven year old boy who has a run in with some real life witches!

What's caught your eye so far? Make sure you keep checking back for more details on our 2020 film slate!