Something really big has just arrived on the Nintendo Switch…

LEGO Jurassic World lets Switch players journey across not one, but four films. Starting with 1993’s groundbreaking Jurassic Park and moving all the way through to 2015’s Jurassic World, it’s an epic adventure packed with dinos galore!

This game packs the portable console with twenty levels-worth of memorable moments from the classic movies, all reimagined with a LEGO twist. Creep through the velociraptor-infested kitchen in Jurassic Park. Return baby Rex to its very angry mummy in Jurassic Park: The Lost World. Face the terrifying pterodactyls in Jurassic Park 3 and watch Rexy face off against Indominous in Jurassic World. Travel with your tiny plastic Jeff Goldblums and Chris Pratts through a wide variety of locations, from Site B to San Diego. And, of course, Mr. DNA is always on hand with some helpful hints and fun facts! 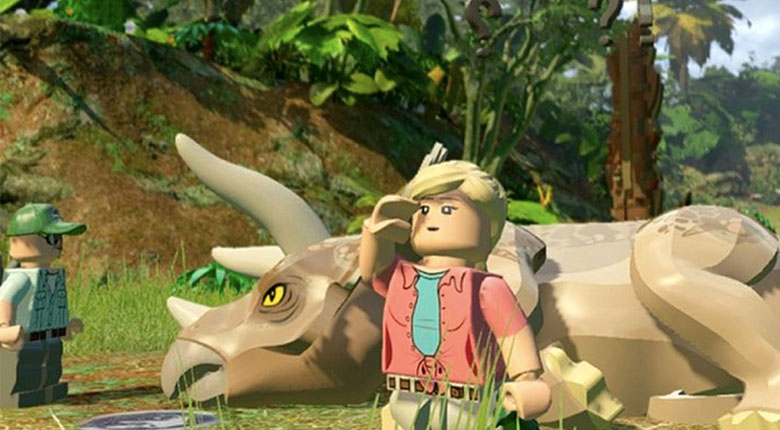 You do plan to have dinosaurs on your dinosaur tour, right?

Of course, it’s the dinosaurs who are the real stars of LEGO Jurassic World. Find the hidden amber elements in each of the levels to unlock different dino species, from the pint-sized compsognathus to the towering T-Rex. Not only that, but you can mix and match each species to create your own custom dinos! Whatever your imagination, “life, uh, finds a way”.

LEGO Jurassic World has already seen success across other platforms, including the PS4, Xbox One, 3DS and PC. Now Switch players finally get to run from raptors, tackle the T-Rex, stomp with stegosaurus and gallop with gallimimus. Make no bones about it, you’re in for a treat of epic proportions.

The park is open.

No dinosaurs were harmed in the making of this game.