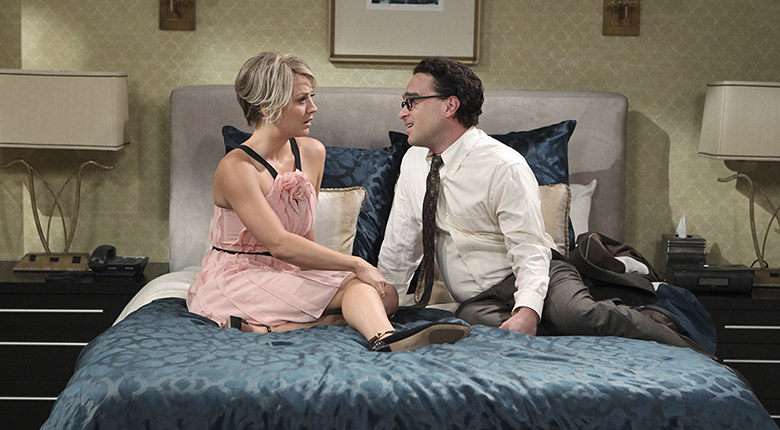 One strand that keeps people coming back is the story of Penny and Leonard’s love. There couldn’t be a more fitting way to celebrate this than by looking back at their story so far…

The Big Bang Theory begins with Penny moving into the apartment across the hall from Leonard and Sheldon. Leonard is immediately smitten and sets his sights on a potential date.

When Leonard clumsily invites Penny to share his and Sheldon’s Indian food, he talks for a little too long about its laxative qualities. Somehow, she still accepts the invitation.

In The Fuzzy Boots Corollary Leonard finally builds up the courage to ask Penny out on a date. The evening initially turns sour when Penny misinterprets the invitation as one between friends, but before long Leonard and Penny’s love begins to blossom.

Low: Their relationship is put on ice - literally (“The Monopolar Expedition” Season 2)

Just as things are starting to progress between the pair, Leonard heads out to the North Pole for three months. Absence certainly makes the heart grow fonder and, when Leonard returns, he and Penny finally consummate their relationship.

High: Leonard tells Penny that he loves her (“The Wheaton Recurrence” Season 3)

Leonard finally tells Penny that he loves her towards the end of Season 3. Unfortunately it freaks her out, and after following the advice of Wil Wheaton, she decides to break up with him.

As their romantic relationship breaks down, Leonard and Penny gradually return to being friends. When Penny begins dating a guy called Zack, she soon realises that Leonard has ruined her ability to tolerate those who aren’t as smart as he is. Meanwhile, Leonard has started dating Raj’s sister Priya.

Proving that true love conquers all, they soon ended their respective relationships with a vision of working on their own. They agreed to some couples “beta testing”, even going so far as formally reporting problems within the relationship to one another.

… and he does it during sex. If that doesn’t make things weird enough, more secrets are exposed just as things between Penny and Leonard begin to get really serious. Following a wild weekend in Vegas a few years ago, she’s already legally married her ex-boyfriend Zack.

Penny and Leonard’s highs and lows are often intertwined. For instance, when Penny gets fired from the movie she’s working on, it leads to Leonard’s successful proposal. There are still obstacles ahead and Sheldon’s future living arrangements are sure to be one of them, but by the beginning of Season 9 it looks like Penny and Leonard are finally ready to tie the knot…