Shazam! stars Zachary Levi as the title character, with Asher Angel as his younger self and Jack Dylan Grazer as the best friend every super hero needs. The latest addition to the DC universe, Shazam! hits cinemas on April 5. To get you ready, we’ve compiled the ultimate list of film facts.

1. The Super Hero now known as Shazam, alter ego of young Billy Batson, first appeared in comic books in 1940’s Whiz Comics #2, published by Fawcett Comics, and was the first comic book superhero to be adapted to film.

2. Principal photography for SHAZAM! was shot in Toronto, Canada, where on the first day of prep shoot, the temperature was as low as -15 degrees Celsius. It got even colder throughout production.

3. It took an average of 20 minutes for SHAZAM! star Zachary Levi to get into his Super Hero costume.

4. Working out five to six days a week, SHAZAM! star Zachary Levi also consumed a diet composed of 35 percent protein, 55 percent fat, and a lean 10 percent carbohydrate, with a tablespoon of fish oil for “dessert.” 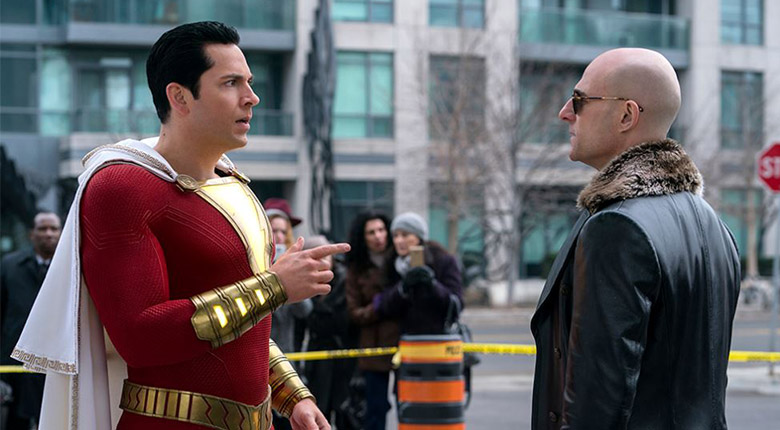 6. According to SHAZAM! production designer Jennifer Spence, the statues representing the Seven Deadly Sins that reside in the Rock of Eternity were hand-sculpted by artisans using such textural references as tree bark or elephant skin to give each Sin a unique look. Spence says that, to her, “They were each beautiful—in an ugly, scary way!”

7. To create the eerie red lights that emanate from eyes in the statues of the Seven Deadly Sins, SHAZAM! director of photography Maxime Alexandre and his team conducted numerous light tests, but ultimately removed a small piece from a light meter and inserted one in each socket.

8. The SHAZAM! production utilised several different buses to film the scene in which Shazam must save a city bus full of passengers falling from a bridge, including one to dangle off the edge of the bridge and one they cut in half.

9. An ongoing challenge for the SHAZAM! costume team, led by costume designer Leah Butler, is a common one with superhero films: an actor’s evolving physique. Butler says that, thanks to diet and exercise, an actor’s body can change quite a bit during filming, so a superhero suit may be modified throughout production.

10. The SHAZAM! property department crafted four individual staffs for the character of the Wizard, played by Djimon Hounsou, which he uses to transfer his powers to Billy Batson.

SHAZAM! is available to own on DVD, Blu-Ray, 3D, 4K and Steelbook here